Move Over Guys – Women Are Taking Over The Roads 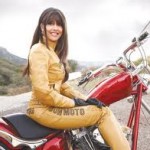 Move over guys! Biker babes and chopper chicks are taking over the roads! According to a survey by the Motorcycle Industry Council, female motorcycle ownership is on the rise. As of 2008, women accounted for 12.3 percent of all motorcycle owners in the U.S. and 23 percent of the 25 million Americans who rode motorcycles the previous year were women. Not only is there an increase in the number of women motorcyclists, but more women are using motorcycles as a source of transportation, not just for recreational use.

As the number of women motorcyclists grows, the awareness of motorcycle safety issues for women bikers has increased as well. Fortunately, law enforcement and other organizations are recognizing the need for safety training for female bikers. New York State Trooper, Arthur Pittman, started the Girls Only Motorcycle Safety Event in Niagara Falls over four years ago. This event, which takes place in August, features free safety demonstrations and informational booths for women motorcyclists. Another event geared specifically toward women motorcyclists is the AMA International Women & Motorcycling Conference, which will be held this year from July 26-29 in Carson City, Nevada.
Some studies have shown that women motorcyclists are more safety conscious than their male counterparts are. According to Nationwide Insurance, approximately one-third of female motorcyclists have completed a certified motorcycle safety course, which is higher than the percentage of men who have taken safety courses. In general, women tend to be more risk averse than men, which may help to reduce the number of motorcycle accidents involving women bikers.
Some general safety tips for women motorcyclists include:

Here are some good websites to check out for general information on things such as motorcycle safety courses and buying proper motorcycle gear:
Motorcycle Safety Foundation (MSF)
The American Motorcyclist Association (AMA)