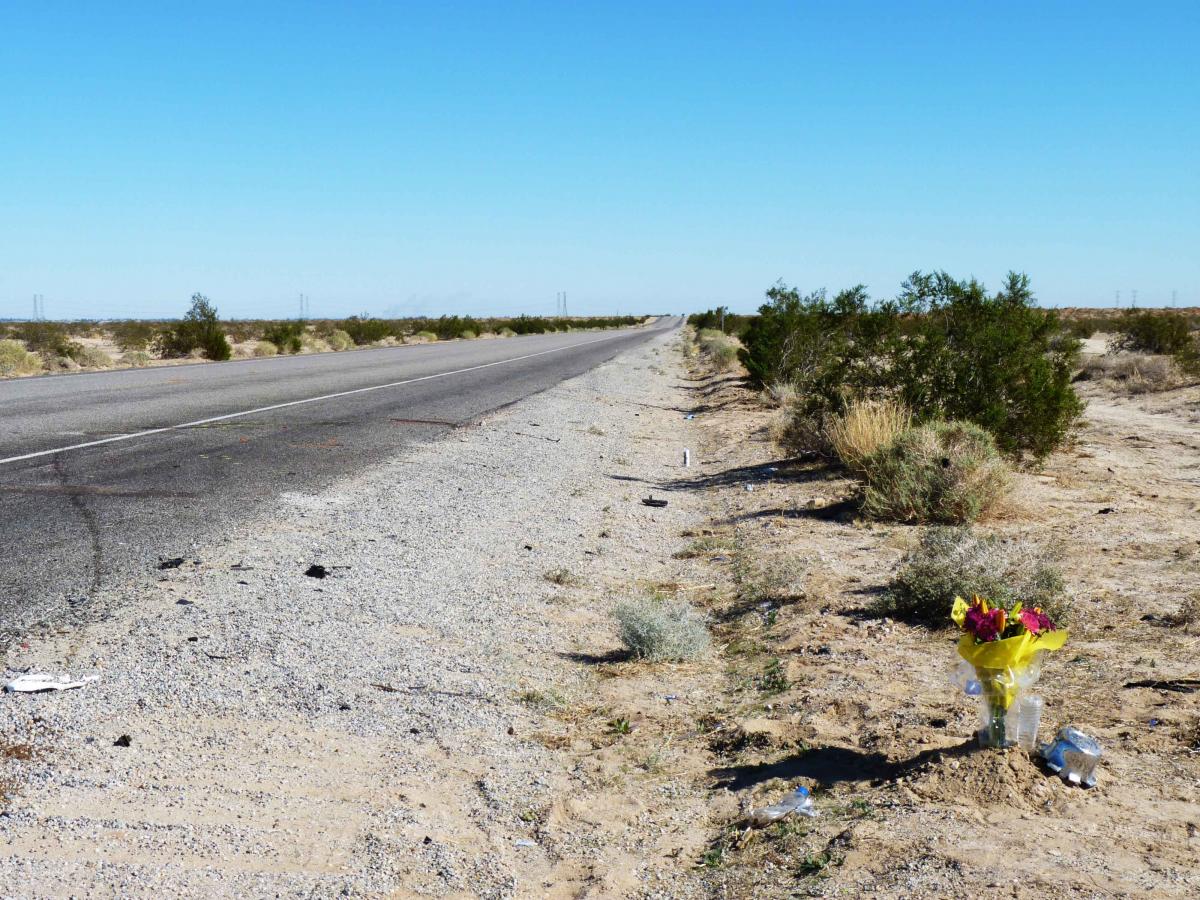 The odor of burned rubber still hangs heavy in the air along Highway 98 east of Ocotillo, where five people lost their life in a horrific crash on Saturday. A lone bouquet of flowers in the sand serves as a silent memorial to four members of the Lakeside Saddle Tramp Club and a car passenger who died at the scene.

Shards of twisted metal , skid marks and a burned spot on the pavement evoke the horror of what first responders have called the worst accident in memory.

Charred ash marks the spot where one motorcycle burned.

Bobadilla is not considered at fault for the Saturday crash on a highway 80 miles east of San Diego.

CHP Officer DeAnn Goudie says an unknown driver in a gold Honda Civic tried to pass the bikers and drove head-on toward Bobadilla, who swerved to avoid him, then over-corrected and hit the group.

“The accident occurred in clear weather on a flat, straight stretch of roadway.It was like a bomb went off,” John Lombardo, one of those injured and a founding member of the club, told the Union-Tribune. The accident site was out of cell phone range, so several bikers rode to a gas station eight miles away to call for help. It took 30 minutes for the first emergency responders to reach the scene, a Border Patrol agent in Ocotillo said today.

Bobadill remains at a hospital in fair condition, NBC news reports. His passenger, Ana Lilia Gonzalez, 31, died. Other fatalities were Lance and Amy Heath of Alpine, Bill Miller of Ramona, and Tonya Trayer of El Cajon.

Trayer’s husband, Wilson, was also seriously injured and remains hospitalized. A trust fund has been established to help the Trayer family, NBC news reports. The Trayers had three children. Donations can be made through the Union Bank of El Cajon, at 580 North 2nd St.

Other victims injured are Kelly Halley and William Barnes, both in serious condition, according to UCSD Medical Center spokesperson Kim Edwards, and Melanie Barnes, who is in critical but stable condition.