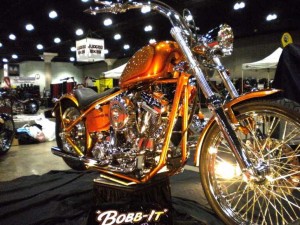 Russ Brown Motorcycle Attorneys®: There are many unsung hero’s within the motorcycle industry who have helped shape the industry and culture with their individual contributions to motorcycle design and custom paint work: while there are many notable custom Harley builders within the motorcycle industry few have achieved the level of success like Mike Toupin’s Chopper Design Group. Based in La Habra, California, Mike and his design crew bring an old school approach to the design of the sexiest custom Harleys you have ever seen.
With over 4 decades of hard work perfecting the art of building custom Harley motorcycles, Mike Toupin has earned continued respect by the local motorcycle community with his unique custom Harley designs, and recognition by his peers and motorcycle publications by stacking up multiple wins at Motorcycle Shows across the U.S.
Mike’s career in the motorcycle industry starts in his teen years; Mike was gear head from an early age wrenching on cars and learning how to paint, and by the time he was 18 he had saved enough money to buy his first motorcycle, a 1938 Knucklehead which was almost a basket case. He dropped every penny he earned into that bike and in short time had it tricked out with plenty of chrome and custom paint.
Hungry to learn all he could, Mike got his first real job as a painter’s helper in 1967 working for the “Chop Top King” Larry Watson. Learning the tricks of the trade in prepping sheet metal for paint and developing the skill required to apply custom paint came easy to a young Mike Toupin and as his skills and reputation increased he soon out grew Watson’s shop and earned a spot working with Junior Conaway who had a plenty of customers who needed a skilled Harley mechanic and painter. For the next 10 years Mike would refine his skill and knowledge of custom paint working for Bill Stroppe, Parnelli Jones, and Bill Hines who were influential pioneers within the custom paint industry.
As the years rolled by, in 1978 Mike found work as a senior painter at Lockheed. While he wasn’t applying slick and sexy pearls 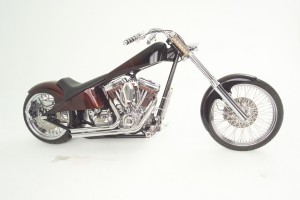 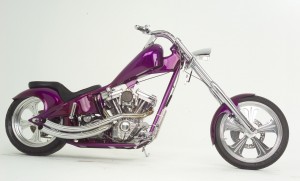