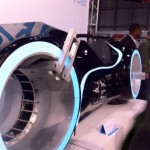 What a show. What a town!  What can you say about New York that has not been said?  I love New York and I love the International Motorcycle Show when it’s in New York.  This was my fourth year attending this motorcycle show and it never disappoints.
The weather was decent winter weather for most of the weekend other then the snow storm that New Yorkers woke up to Saturday AM.  But the snow didn’t stop New Yorkers from hitting the show by the thousands.  By the show’s end 65 000 people had attended the New York International Motorcycle Show.
Carmella Brown and Lisa Petrocelli of New York Rider Magazine were in attendance and as always having a good time in the New York Rider Booth.  They are one of the perks to my annual pilgrimage to New York.  I met Brian Klock of Klock Werks, Scott from All About Bikes, Ken Engelmen from RoadRunner Magazine and so many more.
The bikes were off the hook!  Especially the ones on display by Paul Jr. of Paul Jr. Designs and OCC.  Paul Jr. was at the show with a few gorgeous bikes and signing autographs for his fans.
Electric motorcycles were a hot top.  Powered by lithium batteries, small and light and hardly make any noise.  These bikes may be a great choice in the near future for those looking for a more fuel efficient ride.  As of now the high price point may deter many buyers.
Next up for the International Motorcycle Shows is Cleveland, Ohio this weekend, Minneapolis, Minnesota the weekend of Feb 3rd to the 5th then on to Chicago, Illinois.  The IMS Show then goes on to Charlotte, NC and then wraps up in Daytona, Florida during Daytona Bike Week.
Russ Brown Motorcycle Attorneys® are proud to be part of a great show!
If you go down – Call Russ Brown!  Russ Brown Motorcycle Attorneys® have been fighting for motorcyclists injured in motorcycle crashes for over 30 years. Call 1-800-4-BIKERS and speak to Russ about your biker accident case.
Ride Safe!