The American Motorcyclist Association endorses and supports the motorcycling practice of lane splitting and works diligently to encourage states to allow lane splitting in slow moving or stopped traffic. Why? According to the AMA, lane splitting reduces the motorcyclist’s risk of being involved in a deadly or horrific rear-end accident. In stopped traffic or slowly moving traffic, the risk of a rear-end accident occurring is magnified. Lane splitting gives motorcyclists the chance to avoid those accidents and ride safely through the traffic unharmed.
At the present moment in time, California is the only state in the United States that allows the practice of lane splitting. While there are no laws in California that legalize the practice—there are also no laws that prohibit it. Lane splitting or lane filtering is simply a practice of driving that is allowed or permitted.
California state websites, such as the CHP, even offered safe guidelines for lane splitting so that motorcyclists and motorists alike could be better informed of the safe ways to ride in-between the lanes. Now, however, this important safety information has been removed—all because of one single complaint. 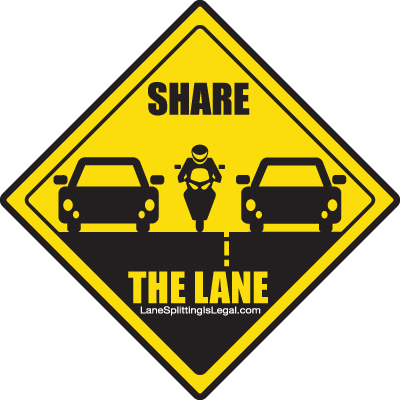 “You should use common sense and not put yourself in obvious danger. By far the most frequent cause of lane-splitting accidents in which the motorcyclist is found at fault is the motorcyclist’s excessive speed, which dramatically cuts down on reaction time. While other motorists have an absolute responsibility to watch out for us, we all know that not everyone does. Even though the other motorist may be found at fault, that’s not going to help you recover from a serious injury. We need to adjust our riding habits according to the traffic and road conditions.”

Says Chuck Koro, of Russ Brown Motorcycle Attorneys®, who for many years have been educating the motorcycling community in California on using caution while lane splitting.