Pope’s Motorcycle Sells For Hundreds Of Thousands Above Estimated Value

It’s not often that a relatively new yet pre-owned Harley-Davidson escalates in price; that typically only happens once it becomes “vintage” after about 25 years. However, yesterday in Paris the motorcycle that belonged to Pope Francis was auctioned off for almost 20 times its estimated value with the final sale price being an astonishing $327,000!

Harley-Davidson Motor Company released a statement to the media that they are thrilled that Pope Francis was able to utilize the bike in this way and earn such an incredible windfall for the people that are served in the missions and shelters near the Vatican. Maripat Blankenheim, a spokeswoman for Harley-Davidson, said in an interview. “I’m not sure that the company had an expectation about what the bike would get, but if we did, it certainly exceeded it.”
The Dyna Super Glide was custom built in Milwaukee for Pope Francis and gifted to him during the 110th anniversary celebrations in Rome in 2013; Willie G. Davidson personally handed over the keys to the Pontiff.
Pope Francis in turn signed the motorcycle and the now “holy” bike went under the hammer on Thursday, February 6th as part of Bonhams auction in the French capital. The bike had an original presale estimate of $16,000 to $22,000.
The Bonhams auction house says bidders were so “hog wild” that they literally ran out of phone lines to handle all the interested buyers. The frenzied bidding continued for more than six minutes escalating into an all-out bidding war; the bike sold for $327,000 — almost 20 times its estimated value – the winning bidder has opted to remain anonymous for the time being.

The proceeds will be utilized to refurbish the soup kitchen and hostel run by the Caritas charity in Rome.  “We are extremely grateful to Pope Francis for this,” said Monsignor Enrico Feroci who is the director of the Rome Diocese.

Bonhams conservatively expected the bike to stay below the $20,000 mark and were stunned that the global popularity of the Pontiff pushed the price literally through the roof.
PHOTO CREDITS:  Dhananjay Khadilkar 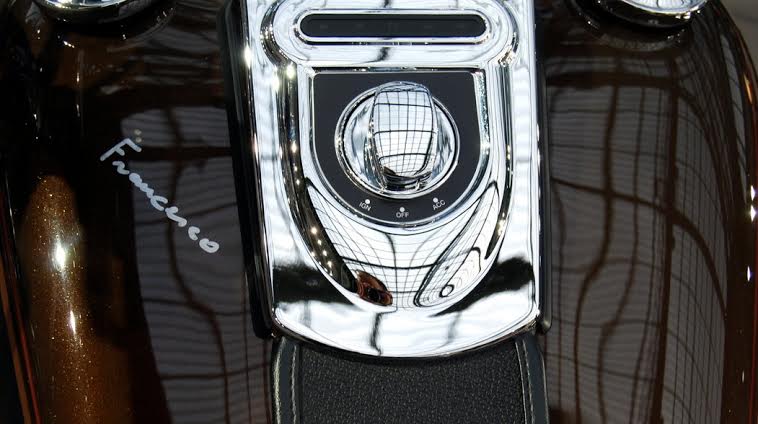