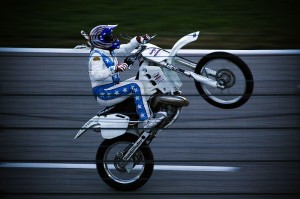 Stuntman Robbie Knievel caused quite the commotion in Sturgis, South Dakota on Tuesday when he was arrested on a DUI charge after wrecking his motor home and causing property damage to another camper’s rig.
Knievel, 51, is believed to have run into two other motorhomes and then left the scene.  The son of the legendary daredevil Evel Knievel, was quickly found by law enforcement. He was sitting in the driver’s seat of his RV, at a stop in a parking lot, and was sending texts.
He admitted to officers that he had three drinks and agreed to take a breathalyzer test; he was found to be three times over the legal limit and was taken to jail. After his booking, he was released and has been suspended from driving for 30 days and ordered to pay a $600 fine.
Charmaine Blake, is Kenievel’s spokeswoman, and told the media in an email that Knievel had been drinking but denied that he was intoxicated.
In spite of this publicity statement, Knievel phoned TMZ Live and admitted he was “plastered” on Tuesday when the incident occurred.
“I have an alcohol problem,” said Knievel. “I’m a cowboy. I’m not a redneck. But I love whiskey.” He went on to say, “I ride motorcycles and I friggin’ drink and ride –that’s my deal.”
The most troubling part of the interview came when TMZ asked Knievel how he would feel if he injured someone while he was inebriated behind the wheel.
“I shouldn’t be drinking and driving because I could kill somebody,” said Knievel. “And you know what, it would be better if I killed myself.”
The entire interview can be seen on this video.