Usher in Autumn With a Trip to Biketoberfest Florida

Florida Motorcycle Law; With sunshine and warm weather year round, it’s hard to believe that Daytona’s summer motorcycle season will be ending in just a few short months. The season kicked off with Daytona Bike Week back in March and closes with Biketoberfest 2012, which will run from October 18-21, 2012. This year marks the 20th anniversary for this international bike festival and thousands of motorcyclists will flock to Florida for this long October weekend filled with sun, beaches, and bikes.
Biketoberfest started in 1992 when the Daytona Beach Area Convention and Visitors Bureau decided to create a biker event similar to the spring Daytona Bike Week in order to boost tourism during the off-season. Over 5,000 new visitors attended the event, which was initially called “The Daytona Fall Tour.” In 1993, the name was changed to Biketoberfest and its popularity among bike enthusiasts has continued to grow over the years. Today, this Daytona motorcycle event attracts anywhere from 75,000 to 100,000 bikers from all over Florida, the United States and the world. 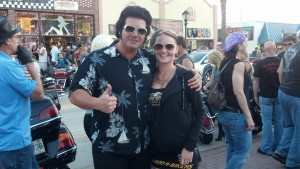 Biketoberfest activities take place all over the Daytona Beach area. One of the most popular areas, Main Street, is closed to traffic during Biketoberfest. Here you will find plenty of live entertainment, food, and vendors. Just on the other side of the Main Street Bridge is another popular Biketoberfest location – Beach Street – where there will be many motorcycle activities at the Riverfront Park including the Harley Pin Stop, bike displays, as well as more food and entertainment. The fun isn’t limited to festivals and demos. You’ll also find an abundance of motorcycle racing action at Daytona International Speedway.
So, before you store your bike away for the winter, head down to Daytona Beach for one last hurrah at the 2012 Biketoberfest! Russ Brown Motorcycle Attorneys® will be there to soak up some sun and introduce more bikers to BAM, our free roadside and legal assistance program. Call us today at 1-800-4-BIKERS to learn more or visit us online. We Ride—We Care—We Win!