Other states are looking to Washington State’s Profiling Law as a model, so this is important to all riders. ABATE and the Council of Clubs of Washington State, collectively representing thousands of the state’s registered motorcyclists, is requesting support and sponsorship of a simple, cost-free amendment to the law addressing motorcycle profiling. In 2011, every legislator in Washington State passed RCW 43.101.419 into law. ABATE and the COC believe the law has been mostly a success, but the problem has not been eliminated. Although reports of profiling are nowhere near pre-2011 levels, and incidents have been reduced since 2011 overall, there has been an uptick in incidents reported over the last 3 years.
The Problem
Many believe that a 2014 case State Of Washington v. Kenneth Kelly, a civil proceeding involving the Bandidos Motorcycle Club, may be responsible for this increase. A classic case of profiling, motorcyclists prevailed on a 4th amendment duration of stop challenge. But 43.101.419 was explicitly questioned. Although the current law requires that training and policy statements on motorcycle profiling be integrated with current training and policies on profiling, the District Court in Eastern Washington, asked to interpret 43.101.419, concluded that the lack of an explicit prohibition or a relief provision makes the law unenforceable in Federal court. This weakens the deterrent affect and the ability of the law to discourage these incidents from occurring in the first place.
The Solution
Fortunately, there is a simple quick-fix. We need to add teeth to an otherwise solid statute. An amendment adding an explicit prohibition against motorcycle profiling and a relief provision providing injunctive relief, actual damages, and attorney fees, would be a cost-free solution to strengthening the law and more fully fulfilling the original intent of the Washington State legislature. The implications extend beyond Washington’s borders. As the first state to address the issue, Washington’s statute is being modeled by other states seeking to address motorcycle profiling. Improving Washington’s statute improves law coast-to-coast. 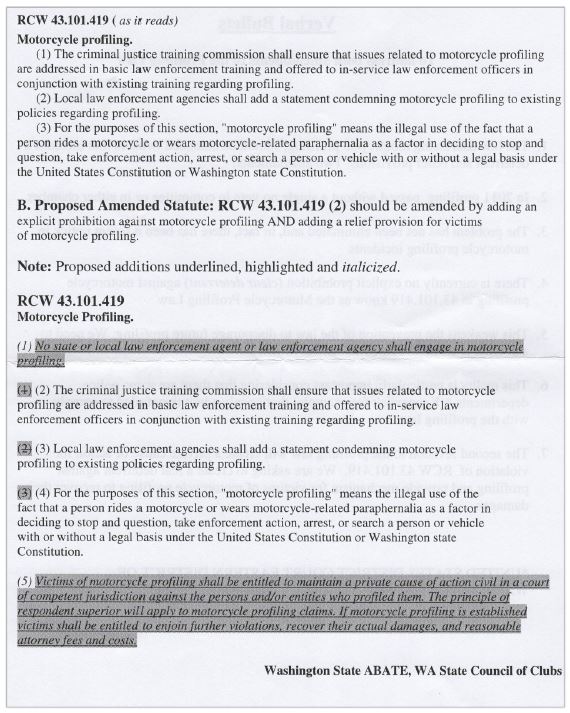